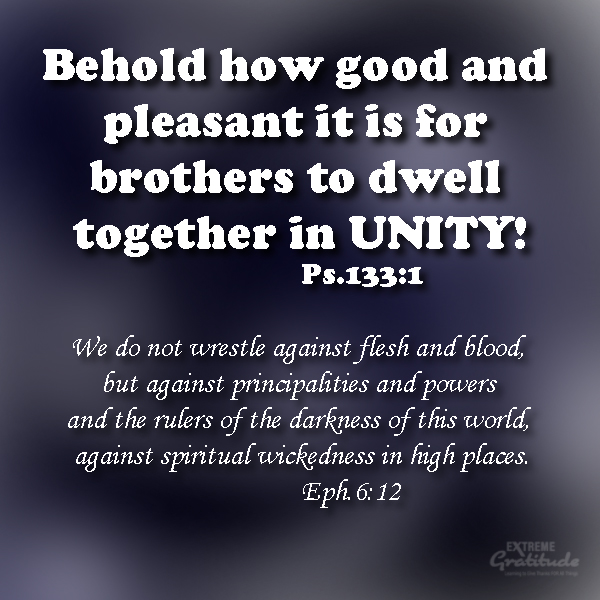 Our world is in turmoil because of the global Covid-19 pandemic. People around the world are concerned about how they will survive the disease, and about how they will survive financially. For some health is the priority. Others don’t feel the threat or risk of disease nearly so much as they feel and fear the financial impact. And so, there’s a difference of opinion. People complain about the disunity in our country. But it isn’t just here, it’s global. There are protests in Ecuador and other countries, just like here. People take sides and out of whatever fear drives them, they point fingers and make accusations, and ridicule, and

and you know what?  When all this started, I was naive enough to hope that while we were all sequestered at home for 3 or 4 weeks, that maybe(!) if we didn’t have “flesh and blood” people to deal with, and our material possessions didn’t satisfy, we might gain a spiritual focus. I thought, hoped, we might have time to chill out a little, cool down, maybe spend some time with family and with God, and come out of this a kinder, gentler, more neighborly, loving people. Ha. Silly me.  Instead, our on-line snootiness and pettiness just ramped up and we went right on being rude and battling “flesh and blood,” except we did it at a social distance.

Now we have this ding-bat (not representative of good and decent) policeman in Minnesota that kills a black man, and we’re suddenly dealing with race riots like the 1960’s. And we have people taking sides on that event on-line, too.

“We do not wrestle against flesh and blood, [That means physical, material, tangible things] but against the rulers, against the powers, against the world forces of this darkness, against the spiritual forces of wickedness in the heavenlies” Ephesians 6:12. Those things Paul lists that we do wrestle against are all Biblical terms for spiritual forces, Satan and his demons if you will. Satan does not give a rip about any of the flesh and blood stuff going on in this world, even though he seems to delight in wreaking his fair share of havoc. All he is concerned about is bringing darkness and wickedness in ways that will obscure the truth and keep people from seeing the Light. And it seems he’s being pretty effective right now, and has been increasingly so for the past 25-30 years. Hmm. I could point to things and events going back much further than that which have contributed to this present darkness. Suffice it to say it seems to be intensifying in recent years. We are on the verge of a new dark age, or a new revival. I’m still hopeful it is the latter.

My hope is mainly because of the promise of Hebrews 2:14 – “Therefore, since the children share in flesh and blood, He Himself likewise also partook of the same that through death He might render powerless him who had the power of death, that is, the devil.”

“Render powerless.” He may not look powerless right now, but a better understanding of the term reveals the truth. The word translated “render powerless” literally means to make of no effect. As I pointed out, the devil doesn’t care about any of this temporal earthly stuff we’re dealing with, not even with the things he causes. Satan didn’t care about George Floyd, even though some reports show he was a devoted follower of Christ while others show he was a petty criminal. Satan only wanted to bring darkness, division and distraction to keep people full of anger and bitterness, and spewing pettiness and filth and wrath and bitterness, and keeping their eyes off the Truth.

How do you defeat that? Only Jesus. Only through the power of the Cross. Only through a love relationship with God. If we would turn to God in the face of evil we would be doing what the Bible calls dying to self. Instead of getting on our high horse about President Trump, or Nancy Pelosi, or Obama, or whatever(!), if we would just look to Him, we would find peace through the power of His cross, through His shed blood and torn flesh, through His resurrection, through His out-poured Holy Spirit. We must learn to turn from the face of evil and press into the love of Christ. He came to bring a kingdom. It was not and is not a kingdom of this world. So why do we get so up-tight and fretful over the things of this world. He said, if we would “seek first His kingdom and His righteousness, all these things [the things we need] would be added to us.” On top of that, He challenged us to “believe that He is, and that He is a rewarder of those who seek Him.” If people turn to Him instead of focusing on the darkness and evil and wickedness around us, Satan’s worst efforts would not have the real desired effect he’s after. He would be “of no effect.”

And that brings us to the 2nd thing on my heart. Pentecost.

Tomorrow, May 31, 2020, is “Pentecost Sunday.” On the first pentecost, the Holy Spirit came into the room where Jesus’ followers were gathered. He did not come and fill the room with fire or smoke as He did at the dedication of the tabernacle in the wilderness, or Solomon’s Temple. He came and appeared as a flame over each individual believer. No longer did God intend to dwell in a building. He completed the great mystery of the ages, represented by the Temple, and that mystery was “Christ in you, the hope of glory.” This Sunday, the body of Christ has an opportunity that it has not seen to any greater degree in the past 2000 years. Whether your church is meeting in person, or on-line, we should be praying for a new out-pouring of His Spirit. We should be praying for renewal of faith, renewal of spiritual focus, for revival of the church (not just the local church but the body of Christ at large), for the salvation of the lost, for the healing of our world and our nation, and the defeat of darkness, despair, bitterness, pettiness, vitriol, and fear, and all the works of the devil, the spiritual enemy against whom is the real battle.