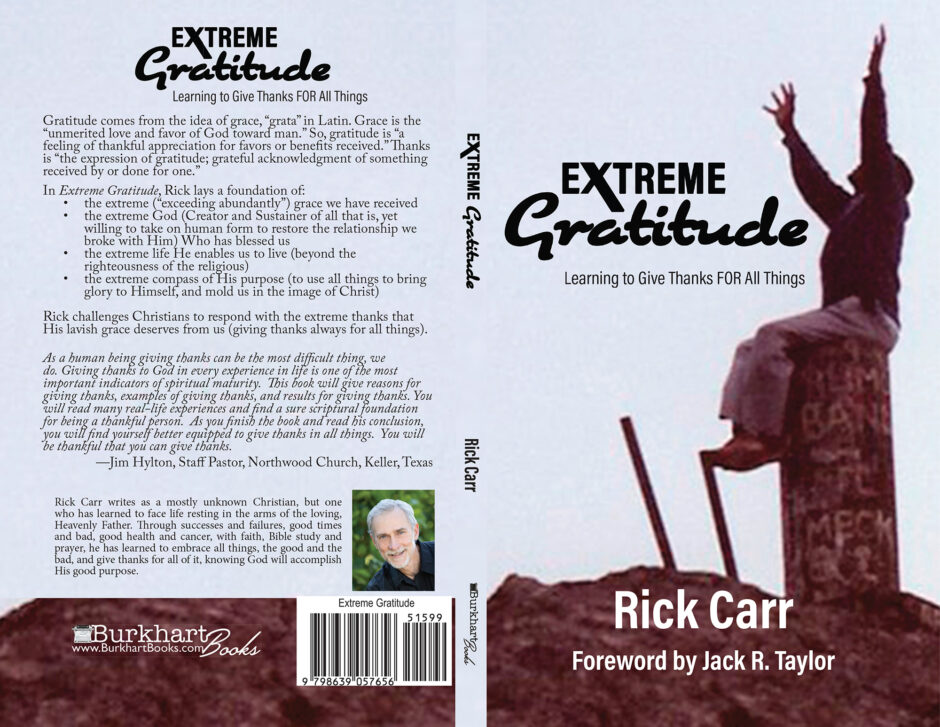 Zig Ziglar is often thought of the as the consummate salesman. He definitely understood sales, and he was good at it, whether he was selling cookware, or selling his workshops and books that taught others how to sell. One thing I remember hearing him speak of was “shameless self promotion.” You can’t be afraid to put yourself out there and let others know you have something worthwhile to offer. I love the idea, but in reality, it is difficult for me. I think it’s fear. Fear that I might come across as self-centered, or even annoying and obnoxious. Then, there’s the fear that someone might hear my promise of what my product can deliver, and not experience that for themselves. I don’t want to be accused of over-promising and under-delivering.

The truth is, though, in the book, Extreme Gratitude, and on this blog, I really have something timely, and timeless, to offer. I purposely write in a way to avoid, for the most part, any specific issues or situations. I don’t want people to say, “Oh, well, that’s not what I’m going through, so this doesn’t apply to me.” My goal is to present the truths and principles I share in a way that declares their value, the Biblical foundation for them, and the broad application to whatever crisis or situation one might be facing.

This really hit me a few days ago while considering ways to get Extreme Gratitude out to a broader audience. In his review and endorsement of the book, Dr. David White, pastor of the Gathering Church in Moravian Falls, NC, said, “Extreme Gratitude is a book written for an hour such as this!”

Wait a minute. It was written almost 30 years ago! When the opportunity to publish presented itself earlier this year, I updated a few references to make it feel contemporary. Essentially, though, it is as it was originally written. I was told then, by a major publisher, that if a major publisher published my book, since I was pretty much unknown, it would just go in their catalog, and the stores that received automatic releases would get a couple of copies. Unless a sales rep read and got really excited about it, that’s all the promotion it would get. I looked around for a smaller publisher, but did not settle on one before life and circumstances took my focus elsewhere. After I had cancer in 2009, and the principles I had written and taught for 20 years saw me through my own life-threatening crisis, getting the book published became a bucket list priority. I was offered a publishing deal a year or two later, but just didn’t feel right about it. The Lord protected me from a company that went out of business a couple of years later because of unscrupulous practices and failure to follow through on their promises to their clients.

Then in January, 2020, I went to a men’s retreat. During the first session, we each had an opportunity to introduce ourselves and tell something about ourselves. One thing I shared was that I had written a book that I hoped to one day get published. It turned out, one of the men who helped set up the retreat got me aside later and said, “You know, I have a publishing company, and can publish your book for you.” By July 2020, it was in print.

It was written 30 years ago, but it was written for an hour such as this! What are you facing? Divorce? Death of a dream? Business failure? Wayward child? Public humiliation? Racial prejudice? Abuse – physical, emotional, verbal or sexual? Illness? Cancer? Parkinson’s? A child with a “birth defect?” Overwhelming temptation to some habitual sin? Things that people have and will always face. Or maybe your big challenge is more specific to this year – 2020. Covid-19 – you or a loved one sick, or the death of a loved one? Loss of a business due to force closing? Loneliness? Isolation? Racial prejudice on steroids? Hurricanes, tornadoes, storms, and flooding?

Whatever you are facing, and as extremely ridiculous as it may sound, Extreme Gratitude is for you. (That’s part of why it is called “extreme.”)