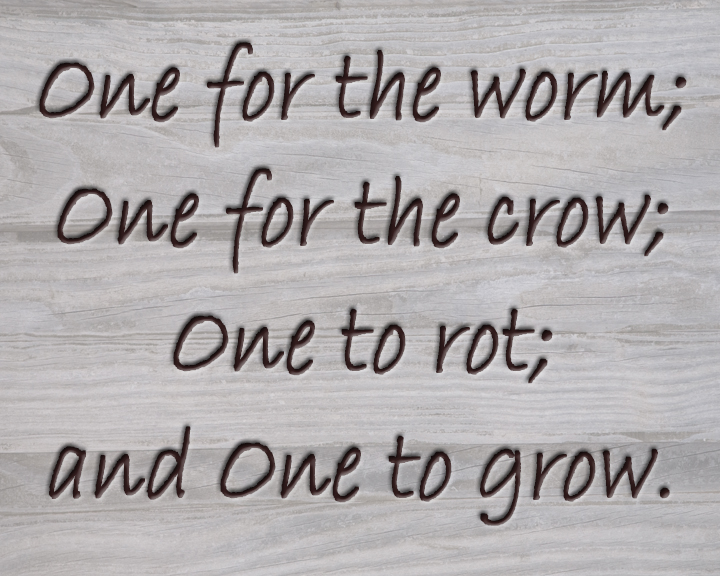 Wo! Spring is coming. Can you believe it?!? It’s almost time to plant our garden. I always have the best intentions in the Fall. I’m going to till the garden several times during the winter – work in material from the compost bins and leaves from the yard. In January, I realize I haven’t done that yet. I had not even pulled out all the dead plants until a few days ago.

When I was a child, I watched my Dad plant his garden. He would till it up and form the rows or mounds, depending on the type of crop. He would go along and punch small indentations for the seeds, then come back and drop in the seeds – four in each hole, for most of the plants. When I asked him, “Why four?” He said it was what he had learned from his grandfather, and told me a little poem.

John 12:24 says, “Unless a grain of wheat falls into the earth and dies, it remains alone, but if it dies, it brings forth much fruit.” I thought about my great-granddad’s poem in light of that verse and had to ask, which one was Jesus referring to? Obviously the ones eaten by worm and crow are gone and don’t produce fruit. The one that rots is surely dead, but doesn’t grow or bring forth fruit. That would mean that the one that grows, is also the one that dies in order to produce. If it dies, how does it produce fruit? And, if it dies, why doesn’t it rot?

Remember in school when you put a seed in a jar and filled the jar with dirt or paper so that the seed was pressed against the glass and you could watch it grow. Eventually, it began to split open and sent out a little root. A stem broke through and began to unfurl little leaves. Soon you had a little plant with a seed stuck to its side. Before long, as the plant continued to grow, there was no sign of the seed itself.

A seed must cease to be a seed and become a plant. It must die to being a seed in order to become the stalk on which more seeds can be produced.

After I finished my cancer treatment, I was told by the doctor it was “gone; we got it all.” People would ask me, “How are you doing?” But there was something different in how it sounded. It was especially noticeable when Trish and I were together. They would ask her how she was doing, in a normal, cheerful-greeting, kind of voice. They would ask me, “and how are you doing?” It would be said with seriousness, sometimes with brow wrinkled by concern, in a slightly hushed voice appropriately seasoned with a hint of sympathy, bordering on sorrow. It used to irritate me a little. I would usually just answer with a cheerful, “I’m fine,” or “I’m great.” Although sometimes I would, with almost the same degree of seriousness add, “How are you doing?”

I am a little ashamed I let it bother me. I still occasionally get the same kind of inquiry. While I do not want pity, when you think how flippantly we inquire into one another’s well being without really caring, I realize how blessed I am that they are genuinely asking after my health. When I tell them it has been five years now and I am still cancer free, they are sincerely happy for me. It often leads to their mentioning another friend who had cancer, or is currently going through treatment.

Jesus said, “If anyone wishes to come after Me, he must deny himself, and take up his cross daily and follow Me.” Sometimes that happens just in our choosing to do the right thing, or choosing to not do the wrong thing. Sometimes it comes through major struggles and disasters. Sometimes it is through the loss of a loved one through death or divorce. Sometimes it is a battle with injury or disease – such as cancer. In all these things, as our world is shaken, we can either cling to things that eventually go away or fall apart, or we can cling to the Eternal. We can be devoured by worm or crow, or rot in our self-centered misery. Or, we can die to our small and petty “seedness,” and grow and thrive and produce much fruit in Him.

Which seed do you want to be? How do you respond to life’s challenges? What experiences have you had that have taken you to a deeper understanding of God’s love and faithfulness?