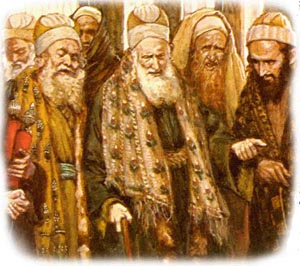 Have you ever wondered what it means to be more righteous than the Pharisees?

Have you ever wondered what a Pharisee is?

The Pharisees were a sect of ancient Judaism. The crash course explanation would go something like this. The rising Babylonian empire had conquered Judea and taken most of the inhabitants of the area to Babylon as slaves. The Jews believed the scriptural explanation that their captivity had resulted from their failure to follow God’s laws. The Pharisees arose out of a passion to make sure that never happened again. They emphasized the law. They explained it and added to it. It was like building a hedge of rules around the law. Even if you broke a few of their rules, you’d still never get close enough to the Law to break it. This was their way to ensure the safety of the nation. They saw themselves as exceedingly righteous.

The Jesus comes along. He said, “For I say to you that unless your righteousness surpasses that of the scribes and Pharisees, you will not enter the kingdom of heaven.” Then, he gives examples. Instead of “Don’t murder.” He says, “don’t be angry, consider someone else ‘useless’ or call them a fool.” In essence, He is recognizing that to kill someone, you must devalue them. So, He says don’t even start down the path of devaluing someone with your attitude. To devalue them “a little” with your attitude is just as unrighteous as devaluing them completely with your actions.

He gave similar examples with adultery and lust; making a vow versus just saying “yes” or “no”; repaying an affront with revenge or kindness; loving your neighbor versus loving everyone, even your enemies; giving to the poor to be noticed or to honor God alone; praying to be noticed or really spending time with the Father….

The righteousness of the New Covenant is different from that of the Old. Paul states it well in Galatians 5:16-24 (really, the point is made in the first 3 verses). He says if we walk by the Spirit, we will not carry out the desire of the flesh. We just won’t. He says it is because the flesh and Spirit are opposed to each other in such a way that “you may not do the things that you please.” I think a lot of people look at Christianity and describe it with that phrase. “Being a Christian means not doing what you please.” But the next verse says, “If you are led by the Spirit, you are not under the Law.” Then he goes on to give descriptions of what walking in the flesh and in the Spirit look like. He lists “deeds of the flesh,” followed by the “fruit of the Spirit.” And we turn that into a list of don’ts and dos.

We think being a Christian means we have to obey all the rules and laws of the Bible – cover to cover – Old and New Testaments.

My Mom was wanting to comment about tattoos, recently, and said, “I know you’re against all this Law stuff.” She told me about a recent conversation with a friend who had pointed out Leviticus 19:28. It says to not mark your body with tattoos. After she finished what she was saying, I went back to her beginning statement. “Just so you know,” I told her, “it isn’t about opposing the Law. I’m not for tattoos either, but it isn’t because of one verse in the Old Testament. For me, it’s because, as a Christian, Jesus Christ has placed in me the Holy Spirit as a ‘seal’ that I belong to Him [Ephesians 1:13-14]. I don’t need a mark on the outside of my body that identifies me as being part of a group, or a subculture, or to set me apart as an individual. I’ve got the biggest ‘tattoo’ in the world. An internal one on my heart – the Holy Spirit marks me as belonging to God. It isn’t about the Law. It’s about belonging to Him and going beyond the Law to a righteousness that’s based on my relationship to Him, not on following a set of rules.”

Mom replied, “But it isn’t taught that way.”

“Bingo!” I thought, and I said, “Exactly. No, it isn’t. And that’s exactly what I’ve been saying all these years. The church is settling for teaching rules to live by, instead of the power of Jesus Christ as my life and righteousness.”

Disclaimer: Please don’t get side tracked by defending whether or not it’s okay to have a tattoo. My reasons for not having one are mine. I don’t judge people who do. It’s their decision. I’ve made plenty of decisions that have left a “mark” on me – choices with results I cannot erase. Some were blatantly sinful, some not-so-much. Please, don’t miss the point: 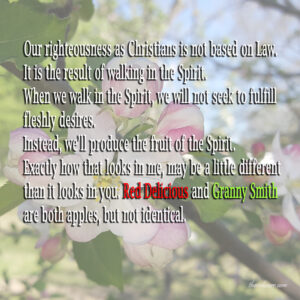 our righteousness as Christians is not based on Law. It is the result of walking in the Spirit. When we walk in the Spirit, we will not seek to fulfill fleshly desires. Instead, we’ll produce the fruit of the Spirit. Exactly how that looks in me, may be a little different than it looks in you. Red Delicious and Granny Smith are both apples, but not identical.

What are your thoughts? What are some other ways the New Testament righteousness exceeds that of the Law as taught by the Pharisees?