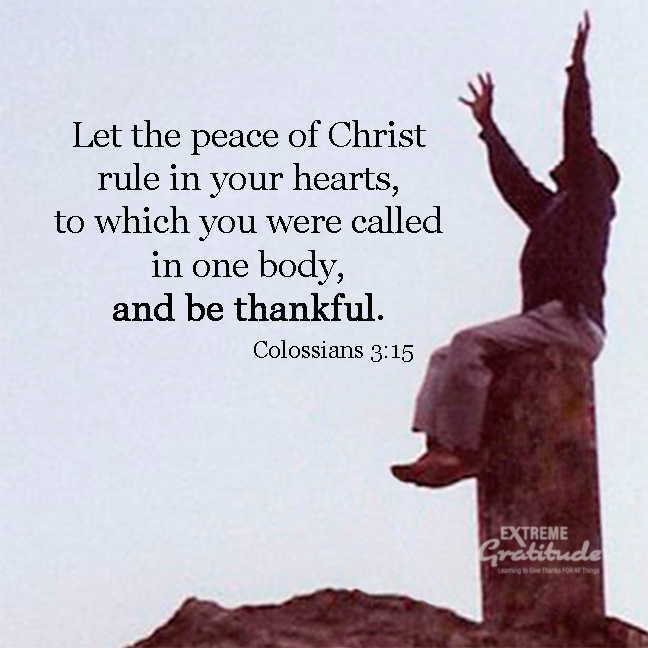 In an organized competition there is usually an umpire, referee, and/or judge whose responsibility it is to make sure the participants know and follow the rules of the game. In Colossians 3:15, Paul writes: “Let the peace of Christ rule in your hearts, to which you were called in one body, and be thankful.” The world he chose for rule is a Greek term for the referee or umpire as in an athletic game. In short, Let the peace of Christ tell your heart when you are on track or totally off base.

Being confronted with choices and options brings a variety of feelings and responses to bear within us. Sometimes just having to make a choice causes uneasiness and unrest. Sometimes some of the available options bring questions and concerns of their own. Prayerfully considering the choices, often there is one that just “feels right.” Not in a “if it feels right do it” kind of sense, but in a calming sense that “this really is the way to go.” In other words, you just feel at peace with the choice.

In addition, your fellow believers, the body of Christ, can be a great resource. The council of spiritually mature friends can be extremely helpful, and their prayers on your behalf, invaluable.

And be thankful. It’s amazing how the process of being confronted with a choice, a temptation, a test, and making the right choice, is far less stressful, and has a more successful conclusion when framed in the kingdom language of thankfulness to God.

Keeping the verse in context of the surrounding verses, these principles have additional implications. In verses 10 and 11, Paul has pointed out that we are all being renewed into the image of our Creator, and as such there is no Greek, Jew, circumcised, uncircumcised, barbarian, Scythian (a particularly barbaric culture), slave, or freeman. Rather, for the us as Christians, it’s all about Christ who is all and is in all. There is no ethnic, racial, cultural or religious basis for distinguishing between Christians.

He then encourages us to be clothed in compassion, kindness, humility, gentleness, patience; putting up with one another; and when there is a point at which we disagree or think there is a difference, forgive, just as the Lord forgave you. There is not even a basis for arguments and disagreements between Christians. Then, on top of that, the garment of the mature Christian is love, which binds us together in unity (verse 14).

In this context, verse 15 could read – “So when you’re trying to figure out how to relate to your fellow believers, let Christ’s peace be your guide, because this is what you were called to in the body of Christ, and (rather than being angry, hateful, slanderous and abusive in speech [verse 8]) be thankful.”