This morning I pulled out the hymnal during my worship time, and one of the songs I sang was “What Child Is This?”, a Christmas carol. I’ve sung it and heard it all my life, but never had really considered the second verse before. The wording is a little confusing:
Why lies He in such mean estate
Where ox and ass are feeding?
Good Christian, fear; for sinners here
The silent Word is pleading.

The first half is pretty obvious. Why would any child be born in a barn and laid to sleep in feed trough? That’s pretty lowly conditions (“mean estate”). On top of that, the chorus has already identified Him as Christ the King. But the second half of that verse is where, when you are singing, or listening to, the verse, it is easy to miss the punctuation. It sounds as though Christians are being exhorted to fear on behalf of sinners. But then, that leaves the last phrase kind of just hanging.

Why is this child lying in a hay bin in a barn? Because here, in this place, at this time, this child is the logos, the thought of God regarding mankind and the reconciliation of sinful man to God. He is the living Word of God, expressed into the world in the human form of a tiny, newborn infant. He is the Word, made flesh and living among us in the simplest, most common, humble form. He is God’s own intercession, pleading for sinful man.

God loves you. The creator of the universe compacted Himself into the form of an infant and slept in a box made to hold hay for cattle or sheep. Calvin Miller, in his book “A Symphony in Sand” gives several eloquent descriptions of this event:

“God has umbilicaled Himself to straw,
Laid by His thunderbolts and learned to cry.”

“The vast Earthmaker, cosmic in His Grace,
Has locked Himself within a little space.
Behold, He whimpers weakly in a world
He made in strength. He who owns all lands
Is now reduced to poverty. He cannot walk
Who strode the galaxies. His tiny hands
Once light-years wide, are chubby-fingered now.
His dying world was weeping in the night.
He would not let it languish without light!”

Here, in this manger, this feed trough, God’s thought, His logos, the Living Word of God, bundled in a tiny, silent, sleeping infant, is the expression of His intercession, His pleading, for fallen man.

Here in this feed trough, the living Word of God, bundled in a tiny, sleeping infant, is the expression of God's own pleading for fallen man. Click To Tweet

What does God think of you? He thinks Jesus. He thinks He should confine His infinite, divine nature in human flesh. He thinks, in His purity and holiness, He should die for your sins, to wash you clean, to forgive you, make you pure and without fault or blemish, so that you can live every moment of every day in fellowship with Him. You can be in His presence. You can be His dwelling place. When God thinks of you, He loves you, and expresses it by taking on a human life, so that He can lay that life down for you, the ultimate expression of love.

God's thoughts about you are shouted into reality through His living Word expressed in a silent, sleeping baby. Click To Tweet 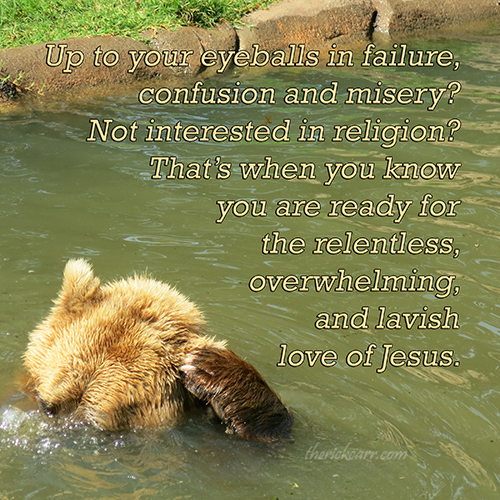