What do you have going for you? What things are in your favor? What can you lay claim to that give you a sense of status or importance?

I was born and raised in a Baptist, church-going family. I was a “good kid” – a leader in the church youth group, class chaplain through most of high school. I helped found a Christian service club at the school. I was “called to the ministry,” attended a Baptist college – majoring in Religion and minoring in Greek. I married a Baptist girl who said she was “called to be a pastor’s wife.” Great fit since I was going to be a pastor. In addition, she played piano, I played guitar and we sang and harmonized well together.

Paul described the things he had going for him in Philippians 3:1-11. He concluded: “But whatever things were gain to me, those things I have counted as loss for the sake of Christ….”

And, I pretty much lost it all. The marriage was a little stormy, mainly because she married me to get away from her alcoholic parents and “hoped the love part would come later.” After a few years, she decided she wanted out and left. (That’s the short version. Relationships are always more complicated than that.) At any rate, all those dreams, all those things I counted as “gain,” slipped through my fingers.

“My sheep hear My voice, and I know them, and they follow Me…. and no one shall snatch them out of My hand” (John 10:28). Over time, because He never let go of me, I realized that I had been clinging to all the trappings the world could offer a young man entering the ministry more than I was clinging to Him. Because He never let go, I learned that all those things I had been clinging to were temporal – including “the ministry.” (One hopes “ministry” will have eternal results, but the ministry career itself is temporal.)

Whatever you are clinging to: a job, a ministry, “the” ministry, your parents, your spouse, or children, or siblings, a house, a car, a pet, a possession, lots of possessions, money, or even your own life – let go. Fall into the Father’s arms. Nothing can snatch you from there. Cling to Him. Seek Him first and His righteousness, and everything else you need in life will be added back to you. Quit trying to get your needs met. Meet Him. Love Him. Seek Him. Know Him. Count all those things you have considered to be gain, or a benefit to yourself to possess, as loss.

Have you had an experience that caused you to lose something you once thought was essential to success or meaning in your life? How are you dealing with that loss? 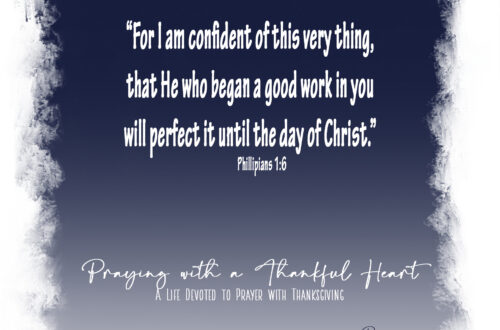