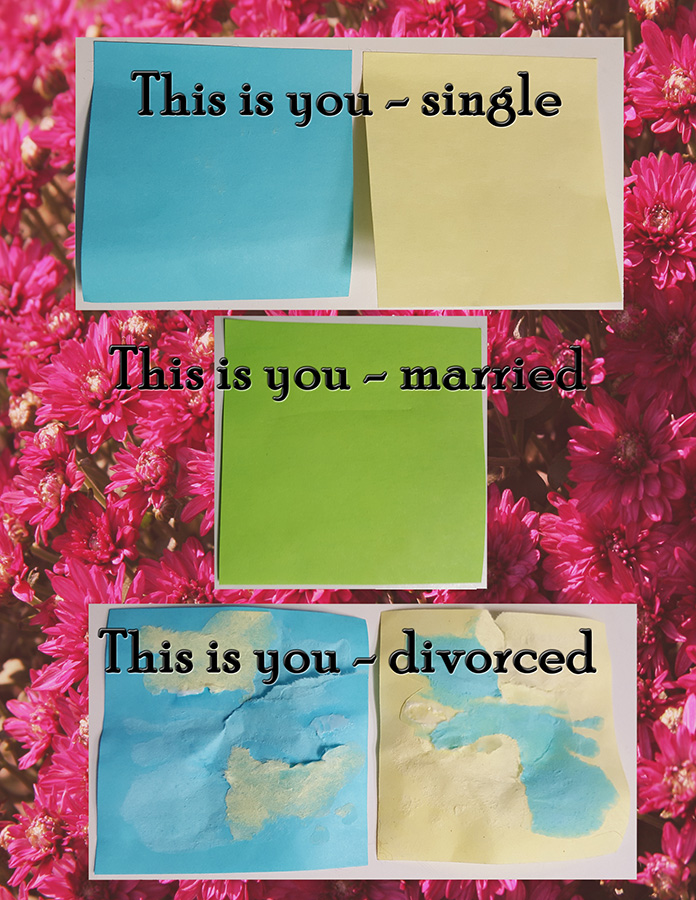 When you glue two pieces of paper together, you cannot get them apart again without some tearing and without each one losing a part of itself – forever a part of the other.

I do not usually deal with specific issues on my blog.  I would much prefer to present the spiritual principles and truths and let you learn to apply them in your own life situations. However, this is one I want to throw out because people about whom I care have recently dealt with or are dealing with this.

I’ve been there, too.  I know the pain of marriage that just doesn’t seem to be working, of an unfaithful spouse, of facing my own failures and inadequacies in a relationship, and of going through a divorce.  When you commit to someone in marriage, you are like two pieces of paper glued together.  You cannot divorce without feeling torn, tattered, and hurt.  You feel the loss not only of the other person, but of part of yourself.

In Genesis 2:24, in the story of creation, God created woman out of man and “for this reason a man shall leave his father and his mother, and be joined to his wife; and they shall become one flesh.”  That message of Scripture is the same and it is true whether or not you believe it is historical or just part of the “creation myth.”  The principle was established in the beginning – husband and wife were made to be one.  Referring to this passage, in Matthew 19:6, Jesus says, “So they are no longer two, but one flesh.  What therefore God has joined together, let no man separate.”

Yes, we could argue specific cases involving adultery, abuse, crime, and so forth.  Even in those cases, my point is:  there is still going to be tearing and hurting and loss caused by the divorce itself, in addition to the pain and hurt that led up to it.

I am not telling you to not divorce.  That is something beyond the purpose of this blog and I will not be baited into that discourse in this context.  That is something you need to work out between you, your spouse, and your Heavenly Father.  Just be aware that a divorce is not a quick fix to the problems of your marriage.  Divorce brings pain all its own.  You need to be very sure that your marriage cannot be fixed, that you are aware of the additional pain and problems that come from ending a marriage, and that it is really worth more to you and everyone else affected by it to end it rather than fix it.

Beyond any shadow of doubt, what I have shared throughout this blog about trusting God and giving thanks will see you through whatever crisis you face.  It isn’t a magical quick fix.  You are still going to deal with hurts and sorrows and all the other emotions of life.  By no means am I discounting the pain you feel.  Cancer, divorce, loss of job, loss of loved ones, PTSD, illness or injury, abuse, bullying, loneliness….  There’s no way I could list every possible hardship.  The ultimate answer is the same.  It comes down to learning to embrace all of life – the good and the bad, and trust God to bring you through.

The principles don’t change just because the experiences differ!  We all have a limited number of emotions with which to respond to life.  (You did see the movie “Inside Out,” right?)  And, quite frankly, all this stuff about “You don’t understand because you haven’t been through what I’m going through” is a bunch of malarkey.  If you want to define “what you’re going through” narrowly enough, then no two people have ever had exactly the same experience.  So, you can find away to isolate yourself all alone in your misery if you want to, and refuse anybody’s help.  The truth is, there are a lot of people who have been through similar things.  And there are many more who have been through things just as intense.  We all had to figure out how to respond based on the basic list of emotions available to each and every one of us.  Find people who have dealt with their crisis effectively and learned valuable spiritual truths from them.  Don’t look for people who share your despair and will encourage you to make the easy, self-centered, and self pitying choices.  It isn’t nearly as important that you become “emotionally stronger” as it is that you become spiritually stronger.  Spiritual strength will lead to emotional, and even physical renewal.  Focusing on the emotional or physical allows you to make the wrong choices, but temporarily feel good about it.  Eventually, you’ll realize your still a torn piece of paper, and you lost a few pieces of yourself along the way.

When Peter got out of the boat and walked on water, yes, he looked around and saw the storm stirring up the waves.  Yes, he got scared and sank.  Yes, Jesus reached out and pulled him up.  No, the storm did not stop immediately.  The Bible says the storm stopped “when they got into the boat, the wind stopped.”  Jesus walked Peter back through the storm to the boat, asking him along the way why he doubted?  He’s asking us the same thing.  The problem is still out there.  But, He’s walking with us, asking, “Why did you doubt?”  The storm hasn’t stopped, but it will.  Walk with Him.  Know Him.  Trust Him.  Be thankful. 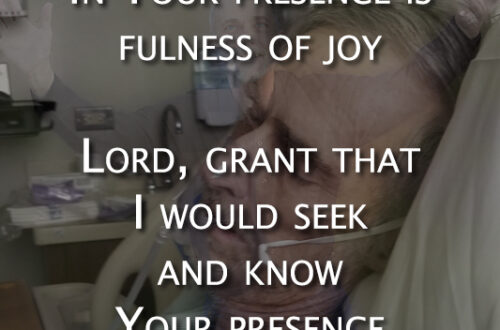 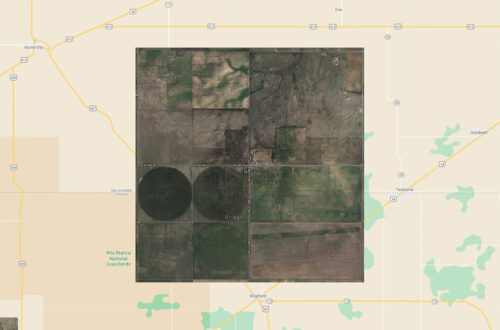