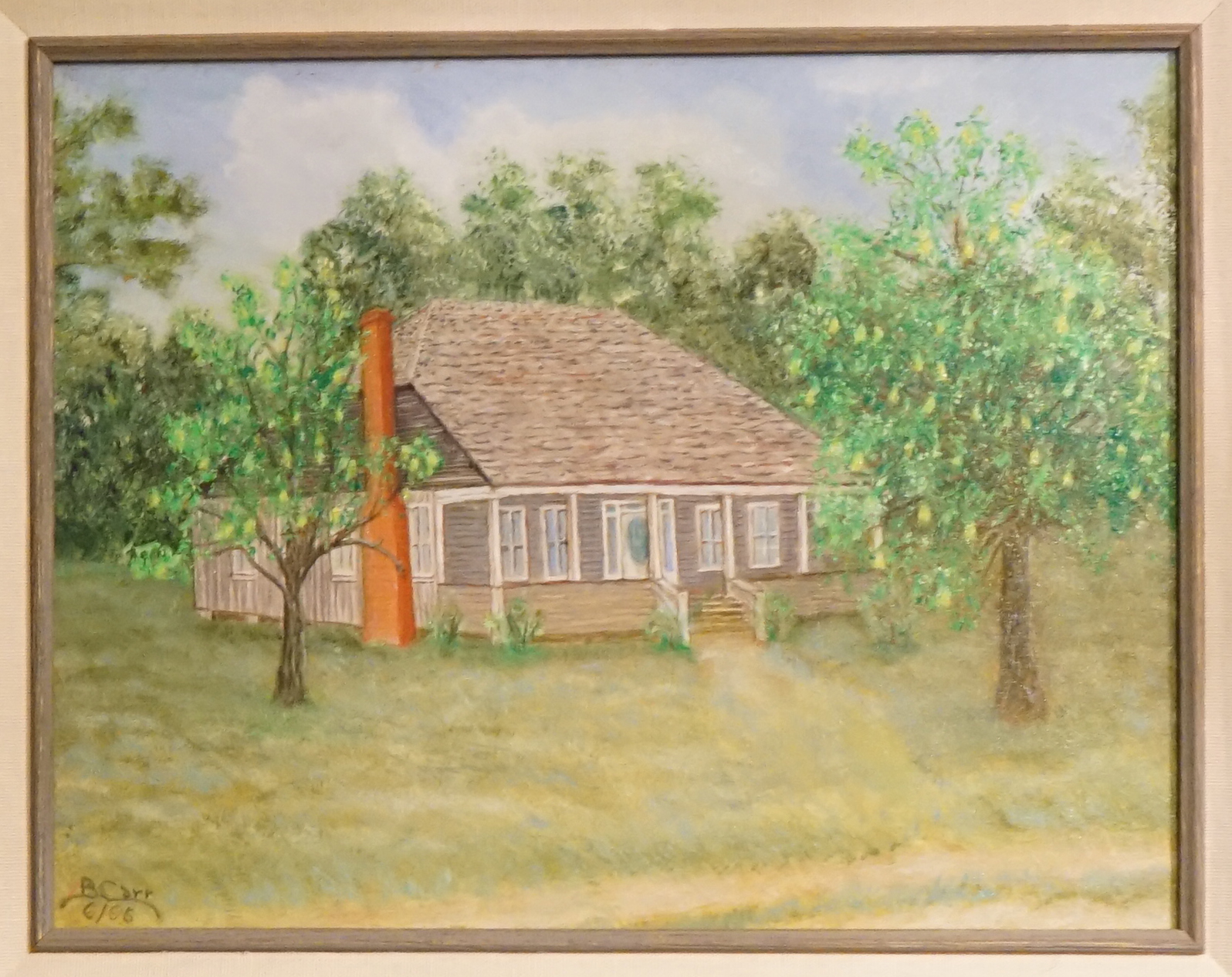 Papa's House - Painted by my dad

If you’re not familiar with west Louisiana, it is beautiful country of rolling hills, streams, rivers, and forests.  In earlier times it was part of the vast pine forests that covered the deep south region of North America from the Atlantic into what is now East Texas.  Much of that area still has remnants of that great forest, though much of it now has hardwood forests, and most of the pines are grown by and for the lumber industry. In early October, I attended a family gathering near Florien, LA.  There is a family “farm,” about 6 miles east of town.  No one farms the family farm any more.  It is a gathering place for the cousins from my Mom’s side of the family.  The heirs collectively own quite a bit of acreage there.  Most of it is forested, some still cleared from when some of our ancestors did farm it.  There among the trees and fields are an old house and a family cemetery.  The cemetery has graves dating back to before the Civil War.

My great grandfather, John C. Sibley, Jr., lived in the old house.  My mom and her family lived there with him for several years during late 1920’s.  I mentioned him in an earlier post.  He would put my Aunt Jean on his shoulder and take her for walks.  She was blind, and he would describe to her the beauty of God’s creation.  So, when I was there in October, one of the things I really wanted to do, was go sit on the porch of that old house, get out my guitar and music, and just worship the Lord in that place that embodies a significant part of my family’s legacy.  That Saturday morning, at day break, I did just that.  It was all I hoped it would be and more.  The Father met me there on that porch with the lush green grass in the fields, the rich browns and deep greens of the surrounding woods, the peacefulness of the country road, a rich blue sky and a glorious sunrise of reds and golds streaking through the trees.  I felt His presence and His love, and I sang and loved Him back for over an hour.  And I knew this was where Papa Sibley had held his little, blind granddaughter and taught her about a loving God through the beauty of His creation.

Papa Sibley was only 5 when his dad died, and just 9 when his Mama passed away.  His Mama had kept the letters her husband wrote to her during the Civil War.  At the time, they had one daughter, Belle; John Jr (Papa) was born after the war.  Here’s John Coleman senior’s advice to his wife on child-rearing:
“Lizzie dear, have you ever learned her yet that there is a God who rules over her destiny. I fear this is a subject that you avoid.  But dear, beware that you do so while she is yet young.  Show her the rising sun, the bright moon, the growing plant, the stately tree, the fragrant flower, the falling rain and such things, and teach her that they are made by a great and good God who loves her and who will save her in life and after death.  Teach her to love the name of God and worship him while she is young and she will not forget to do so when she is old.  Learn her to love everything that is good and beautiful.”And, Lizzie did.  When Lizzie died, her mother, Matilda, adopted the children. Apparently, Matilda, applied John senior’s advice in raising Belle and John, Jr.  And John junior (Papa) did, particularly for Aunt Jean, but I’m guessing for others, too.

Pretty cool, huh?  But, here’s the real deal.  In Romans 1:18-21, Paul says that none of us has an excuse for ungodly or unrighteous actions, or for suppressing the truth in unrighteousness, because God has made known His “invisible attributes, His eternal power and divine nature.”  He made these attributes “clearly seen,” evident to even those who seek to suppress the truth.  Where?  How?  In His creation.  In the things He made – the rising sun, the bright moon, the growing plant, stately tree, fragrant flower, and falling rain.

The problem is, according to Romans 1:21, “Even though they knew God, they did not honor Him as God or give thanks….”  It was because they refused to honor Him, and could not find it in their hearts to be thankful to Him, that their hearts became dark and hard, and they turned to sin and then tried to alleviate their guilt by suppressing the truth.  And people still do that today.

They could not find it in their hearts to be thankful, and their hearts became dark and hard. Give thanks, and let Him soften your heart Click To Tweet

Just look around you.  If you have to drive a few miles out of town to see anything besides bricks, steel and glass, then do it.  But look at the world around you – that God made.  Be awed by it.  Recognize where it came from.  It really wasn’t by chance.  Honor God as God.  And be thankful.