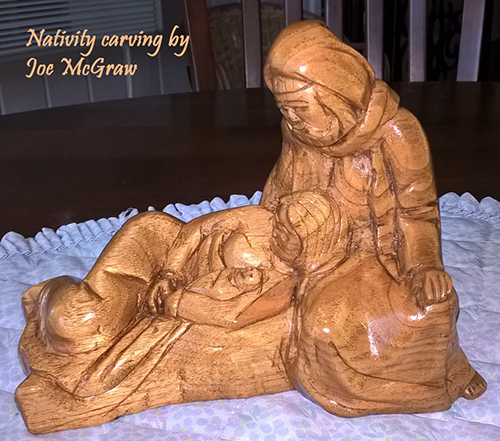 How can rational, 21st century man embrace a religion founded some 2,000 years ago? I’m sorry, but how can he not? How can he not realize that although man is building and discovering and accomplishing amazing things, man has not changed. He is still brutal, manipulative, self-centered, and downright ugly at heart – capable of amazing anger, bitterness, cruelty, harshness and vitriol. Yes, much harm has been done in the name of Christ and the so-called “Christian religion.” But this is not the Christ or the Christianity of the Bible.

“The Christmas Mystery” evokes images of a fictional story taking place at Christmas time involving searching for something, or solving some crime, or reasoning out someone’s strange behavior. There are myriad of possibilities, many of which have been explored in books and movies and TV programs. But this mystery was proclaimed centuries, even millennia ago. It was revealed on that first Christmas night when a young man and woman, deeply in love with one another, found refuge in a barn and laid their newborn baby in a bed of hay in a trough used for feeding cattle – a manger.

What was so mysterious about this event? We’ve told the story countless times in countless ways. We have sung songs about it. We have made into the biggest event on our annual calendar.

In his letter to the church at Ephesus, Paul wrote out a prayer. He prayed that God would grant, according to the riches of His glory, two things:

There is a wealth of truth in those two phrases, but for now, let’s focus on the indwell part. The word used there means to be at home. Literally, it could be translated “to house down.” That’s kind of an odd way of saying it, but it means to settle in, to be not just in a place of dwelling, but to be comfortably at home.

The results of this prayer would be that you would comprehend the full dimensions of the love of Christ and know it in a way that would surpass all knowledge, and that you would “be filled up to all the fullness of God.”

Paul described himself as a steward of “the word of God, the mystery which has been hidden from the ages and generations, but has now been manifested to His saints, to whom God willed to make known what is the riches of the gory of this mystery among the Gentiles, which is Christ in you, the hope of glory.” (Colossians 1:25-27)

The Christmas story is not just a baby in a manger, it is God indwelling His people. It is the gospel story of this child, God with us – Emmanuel – God among us – the creator wrapping Himself in the creation, confining Himself to this tiny little wrapper, growing as a child, becoming a man, living a sinless life, making knowing and fully depending on the heavenly Father His top priority – taking on the death of the cross – the One who did not deserve death dying for those of us who do, then conquering death through the resurrection.  So that He can abide eternally, not just in heaven, but in the each heart that follows Him by faith.

Colossians 1:21-27 – “And although you were formerly alienated and hostile in mind, engaged in evil deeds, yet He has now reconciled you in His fleshly body through death, in order to present you before Him holy and blameless and beyond reproach – if indeed you continue in the faith firmly established and steadfast, and not moved away from the hope of the gospel that you have heard… Christ in you, the hope of glory.”

Not just God with us, but Christ in us. That is the mystery of Christmas. God became man and dwelt among us. In doing so, he only began enacting a series of events that would result in the creator of the universe coming to make His home in your heart. In the process, He would make you holy and blameless and beyond reproach. He would make you a house so beautiful that God Himself would be comfortable dwelling there.