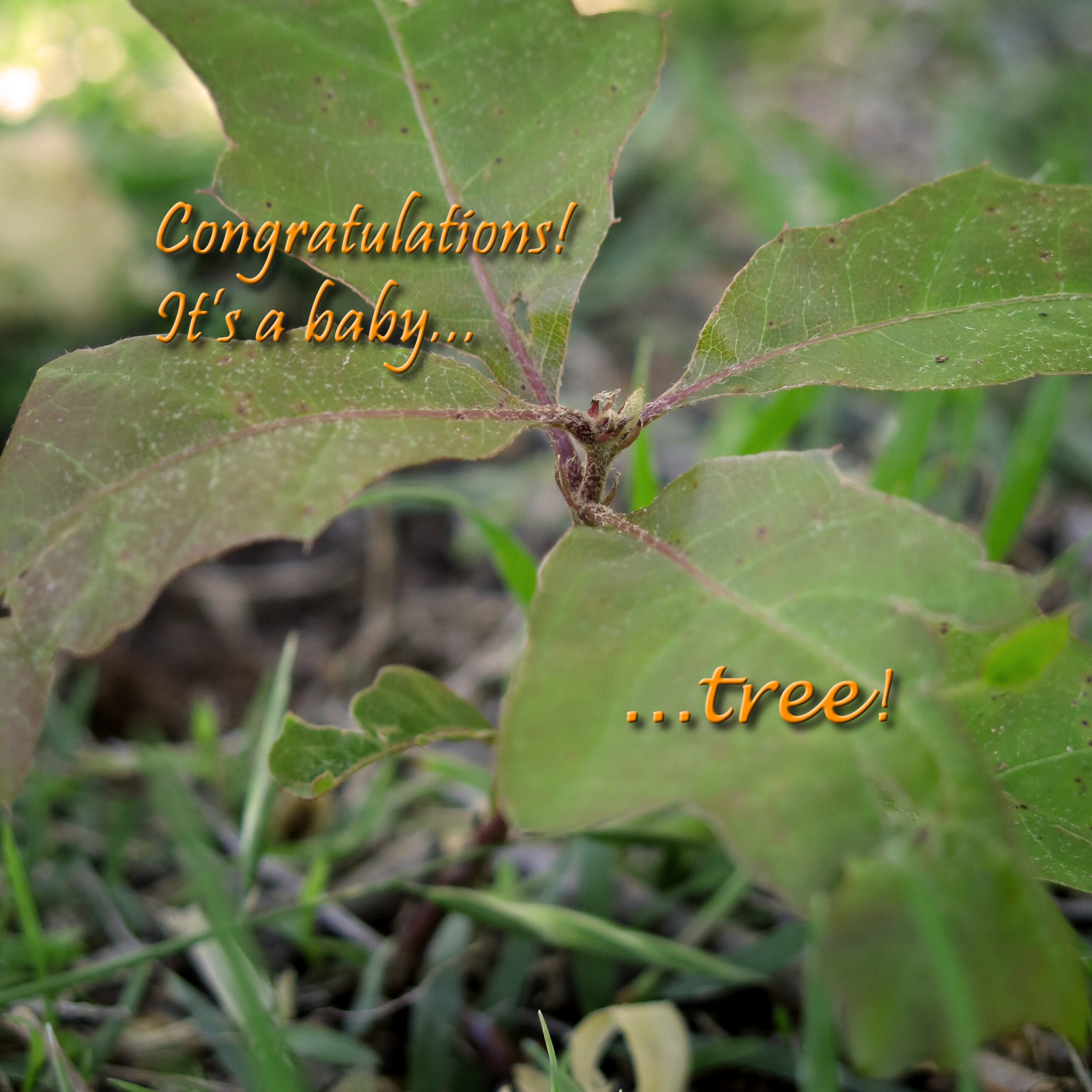 We found some baby oak trees in our yard. Apparently the squirrels and birds have been moving the acorns around because these little trees are nowhere near the young oak trees we already have growing. We left three where they are and put tomato cages around them so we don’t accidentally mow them down. We transplanted some to pots. The dirt fell away from most of them as we removed them from the ground. A couple of them still had the acorns attached. Most didn’t. It was nowhere to be found.

“Some Greeks” sought out Jesus while they were in Jerusalem at the time of the Passover. They were there to worship. Who were they? Were they descendants of Jews who had immigrated to Greece? Were they Greeks in the more common sense in which the word is used among Jews at this time – as a generic term for Gentiles, non-Jews? And were they then proselytes, Gentiles who had accepted the Jewish religion? We don’t know. Nor do we know for certain why they were seeking Jesus, or if Jesus met with them. From the passage, it would appear He did not.

Instead, He responded with words about His pending death. He knew that it was soon, and that through it, He, as the “Son of Man,” would be glorified. But He also knew the nature of His death – that He would be “lifted up” – raised up above the ground and hung on a cross. It was not a pretty picture, and certainly didn’t sound glorious or glorifying. His words describe Himself and what He was doing, but also set forth principles that apply to each of us.

“Truly, truly, I say to you, unless a grain of wheat falls into the earth and dies, it remains alone; but if it dies, it bears much fruit.”

Jesus knew that His death was going to result in life. Life always comes out of death. As trees die in a forest, they become the compost that fertilize the next generation. A seed has to die to become a fruit-bearing plant. In an earlier post I told of a poem my dad shared with me when I asked him why he put four seeds in each hole when he planted his corn.

So, if a seed has to die in order to bear fruit, it obviously is not either of the ones consumed by the worm or crow. Although we associate rotting with death, that seed obviously doesn’t grow either. So, the one that grows must be the one to which Jesus referred. A seed must die to being a seed in order to grow. So our baby trees that had no acorn attached, the tree was all that was left of that acorn.

It is a principle that goes back to the first Garden. When Adam and his wife felt the shame of their sin, exposed before God and one another in the vulnerability of their nakedness – physically and spiritually – God lovingly covered them. The death of that first sacrifice, to clothe them in animal skin, set the precedent of life out of death. It goes back to Noah and the animals and humans who were saved on the ark and came forth to start the world anew. It goes back to Abraham when God had promised him descendants through Isaac and then told him to sacrifice Isaac on an altar. Abraham had learned by that time that God’s promise was immutable and irrevocable, and that if God truly meant for him to go through with this, that God would raise Isaac from the dead. Because he demonstrated his willingness to trust God even in this, God provided a ram as the sacrifice, Abraham received Isaac “from death,” and Isaac received the promise that had been given to his father and became the ancestor of many nations.

And these words of Jesus spoke to the future. They are a promise to all who come to Jesus at the cross. His death becomes our death. His cross becomes our cross. His resurrection becomes ours. His life becomes ours. If we take up our cross daily, we will live. If we lose our life, we will keep it to life eternal. If we “die” to self we will bear much fruit. If we serve Him and follow Him, we will abide with Him and be honored by His Father.

Have you been through, or are you going through, a time of struggle? Do you feel like there’s nothing left to hold onto?

Jesus knew people, like the Greeks in John 12, were seeking Him because He had done some really impressive things – like raising Lazarus from the dead. He also knew that in a few days, He would die on a cross. It would not be so cool or impressive at the time. However, it would be the beginning of life for all who would be willing to let go of this world and its struggles, die to self, and live through Him.

A seed must die to being a seed in order to become a fruit-bearing plant. http://bit.ly/2pqC0eI Click To Tweet
click to retweet, and send me a direct message on my Facebook page with your email or Kindle email address, or sign up for e-mail on my blog, and I’ll send you a digital copy of Jean Ellzey’s book – In Him There Is No Darkness. Jean was born blind and crippled. She was my aunt. Her autobiography is inspiring as she tells of the loneliness of a child who cannot see, who cannot run and play with others, and how she chose God as her best friend, for life.