In 1994, I had the opportunity to go on a mission trip to Africa. I was working for Word Records as a sales representative. I had 3 weeks vacation a year, but they rarely allowed us to take all 3 weeks at one time. We had sales conferences 3 times a year. These were big events with information about our upcoming product releases. Missing one was unheard of. The mission trip would be 3 weeks long, and would overlap a major sales conference. My supervisor was doubtful, but said he would present my request to the VP of sales.

Meanwhile, I had a dream. Here’s the short version: My wife, Trish, and I were in the sky over the east coast of the United States. There was a disturbance in the water down below. We moved down low to see what it was. It was like a bubbling. I touched one of the bubbles, and suddenly, I was flying across the ocean. I quickly came to the coast of Africa. As I neared the coast, the words “I want Africa” burst from within me. As I set foot just beyond the beach, I looked up the coastline and saw the skeletal remains of an old sailing ship. I was in a village with people milling around, going about their daily lives. My heart ached to do something for them, “to improve their lives and give them hope.”

When I shared this with Jimmy Hodges, the organizer of the mission trip, the first thing he said was, “Have you ever been shipwrecked in your life?”

As I mentioned yesterday, as a youth I felt a call to the ministry and thought that for me that meant foreign missions. Right after that experience, I was riding home from church with my Mom. She asked, “What would you do if God sent you to Africa? You’d be a long way from family.” I said, “I would go. If that’s what God wanted He’d take care of me.”

Just before college, the Lord spoke to my heart about staying in this country. I would still be in the ministry, just not overseas. I went to Louisiana College and majored in religion, minored in Greek.

I met a girl. She played the piano, had a nice voice. We sang together. She was “called to be a pastor’s wife.” We thought we had a lot in common. We got engaged our freshman year at college. Married the next summer.

Through college, I worked in churches doing music and youth ministry and interim pastorates. My senior year, I was also Chaplain’s Assistant at a mental hospital. I finished college a semester ahead of schedule. Over Christmas break, we loaded up a U-Haul and moved into a simple little white frame house a few blocks from seminary in Ft. Worth.

All was good. I had a good reputation. I had the respect of my peers, and my relatives were proud of me. I knew what I was going to do with my life. I had a wife who shared in those plans. I was working on a masters degree. It was all “gain,” as Paul put it in Philippians.

Our parents had advised against our getting married so young. “At least wait until after college.” Most of our college friends had questioned our plans. “You guys argue all the time. Are you sure you want to get married?” We didn’t see it. “We don’t argue that much.”

It didn’t take long after we were married for us to admit it. Within a year or two, the “d” word was being tossed around. But, I was in the ministry. Divorce just wasn’t an option. Eventually, it was. She decided she had never loved me. She didn’t want to have my children. She just married me to get away from her alcoholic parents. She wanted out. Most of her reasons sounded like quotes from the soap operas she watched, or from Barry Manilow’s music. However, she was afraid God would punish her if she actually divorced me. Still, she wanted out. I let her go – hoping to somehow, someday win her back. Eventually, I gave up and filed for divorce myself.

I had been raised to believe a divorced person could not be in the ministry. In my mind, I was done. Everything I had considered good about my life seemed to slip through my fingers like sand.

Return to Africa. – Word did approve my missing the sales conference and going on the trip.
After a week of training local church leaders we began a series of open air meetings in local villages. Our first night preaching in the villages, we saw 3,000 people accept the Lord. The African pastors who were with us were celebrating and rejoicing and singing. Their joy enhanced ours. It was the most amazing time of worship and thanksgiving I’ve ever experienced.

Jimmy commented, “Most ministers work their entire life-time pastoring churches, and never experience in their whole careers what we saw tonight.”
The Lord spoke to my heart, “Those 20 years you’ve been out of the ministry, I just gave them all back to you.”

Have you ever had a time of major loss or deep hurt? How did you move on from there? Have you experienced healing and restoration? 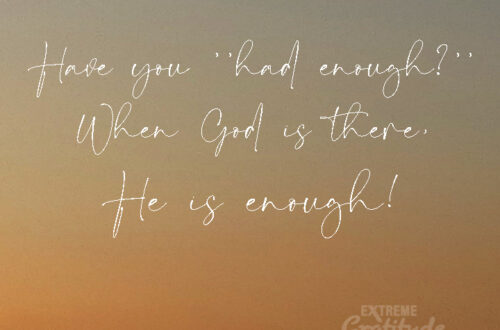